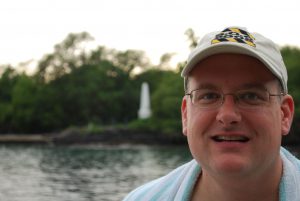 Greg bought his first Saab, a ’75 99 hatch in Emerald Green, in the summer of 1989, as an emergency replacement for a wrecked Chevy Impala.  The handling, steering feedback, and utility of the car were eye-opening.  Despite the wonderful “AUTOMATIC” badge on the rear of his first Saab, Greg quickly concluded Saab virtues were best expressed in manual form.

After a decade of driving Saabs, Greg was thunderstruck to discover that there were local and national Saab clubs, and even (gasp) an annual convention of Saab Owners.  Greg’s first SOC was 2005, at Stratton Mountain, Vermont.  Greg has also served twice as president of the Minnesota Saab Club, 2008 to 2012, and then from 2016 to date.

Greg has been a member of the SCNA Board of Directors for several years, and since 2006 has served as the official photographer for the SOC (unfortunately excluding 2017, when the total solar eclipse could not be rescheduled to accommodate the convention dates).