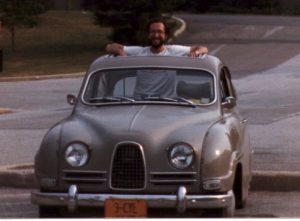 Seth has been a Saabaholic for many years now, and has been the editor and publisher of NINES, the official magazine of the Saab Club of North America, for more than 13 years. He lives in Austin, TX with his amazing wife Diana. They own a 2008 9-3 Convertible and a 2011 9-3 Sportcombi. Pictured is Seth in his first Saab, a 1964 96 with the “Sunshine” sunroof. It’s a family thing with Seth, as he got his start in Saabs early when his father brought home a 1960 96 purchased out of pity because his dad thought the snow tires were on the wrong end – the front! At one time or another, every Saab Seth has owned is one he wishes he had back!

Scroll back to top